I mentioned earlier that I’ve been having issues with my scanner.

I have been working on getting the scanner to properly read the negatives for months.

The same thing it always is: nothing is made for 70mm.

No modern scanner is going to have the trays or film holders for scanning 70mm.

See, the tray for medium format negatives is set up for 120 negatives, those are 60mm wide. So my film is too large to properly fit in the tray. And I can’t just put it on the surface of the flatbed . . . .

Okay I CAN, but when I’ve done that the scan comes out uneven, out of focus in places, all in all it’s not great. The film isn’t flat and the scan comes out warped, especially where the ends of the roll are, because there’s so much curve that they go all wonky.

Another route is would be to trim my film down, but that runs the risk of damaging the emulsion, so that’s out.

All the way out never to be considered again.

And here is one of my serious failings as a human comes in: I overthink.

I also get very focused on the details and forget to look at a the big picture, or even just consider the obvious work arounds.

I spent the past six months trying to come up with making trays to hold my negatives myself. I used paper, cardstock, mountboard. I tried white and black and 18% grey.

Yes folks I sacrificed a grey card for this.

No matter what I use to make the trays, the scanner freaks out and auto closes.

I can’t force it to manually scan for film. Maybe there’s a way and I never found it, but that’s okay. Really.

Because I have tape.

And I will give you a moment to realize that it took me months to remember that tape is a thing, and that I have been using this specific type of tape for projects for the last ten years or so.

The medium format scanning tray for the CanoScan mkII has two parts, the base that holds the film and the upper part that clips in place to old the film taut. 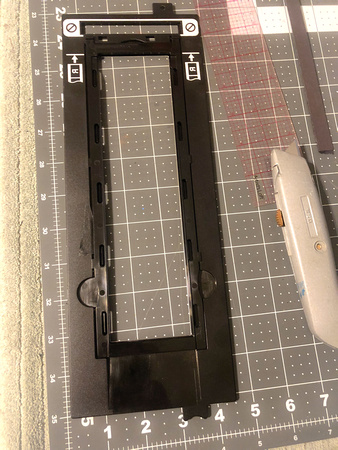 I removed the upper part (it snaps into place, so I was able to do this without actually breaking it) and put the film on, taping it in place. 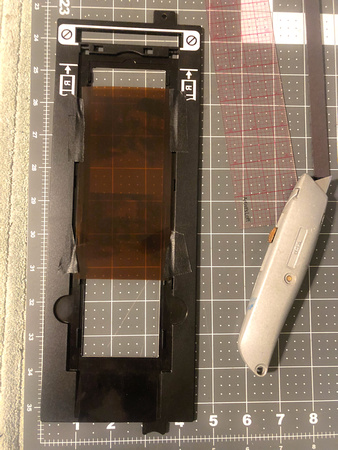 I am a little concerned that this could affect the quality of the scan, but so far it looks good.

I have more testing to do with it, but I’m really happy thus far, and I’ll be posting some galleries soon!