I got a message yesterday from someone I shot at San Diego Comic Con asking if I had the scans from my 70mm shoot with them . . .

I leaned back in my chair and looked up at the canisters of  undeveloped film above my computer I realized: I've done a bad job of keeping those of you who

have shot and worked with me informed about what is going on.

I haven’t posted to my blog in months.

I created this darn thing so that I could document my journey, but that journey was waylaid.

The goal is to get back on track this holiday season. But first, I owe it to you, and honestly to myself, to share with you what’s been going on and why that

film is still on a shelf.

When I returned from SDCC 2017 I had no chemistry to develop the film, so I ordered some when I was able (it's expensive and I don't charge for helping

me make art) with the intention to develop the film as soon as then chemistry arrived.

However within a week I was back in San Diego, this time for an AVID conference (surprise!) for my new job teaching Seventh Grade Math and Science

(and journalism and yearbook). After that it was trainings and meetings and planning and students and when I looked up it was halfway through September.

I took a deep breath and started to plan pacing my way through the film, at worst I could use my Thanksgiving Break to develop nonstop. But September

ended with a blow that did the kind of damage you don't recover from, you learn to live with the pain.

Last Christmas found my Mother in law, Pam, in the hospital with aphasia, a condition where a person has difficulty communicating.

For Pam that meant that she couldn't link the appropriate words to meanings, often using words that were in no way connected to the meaning she was

aiming for. The diagnosis lead to scans and tests and another diagnosis: brain cancer. Specifically a tumor in the speech center.

The doctors did surgery, and her prognosis was good.

Our year went on, holidays, birthdays, I got hired and we celebrated, I started work as a full time teacher . . . and then it all went to hell.

Pam went to the hospital at the end of September because the aphasia was back, and with it, the cancer.

At first we thought there would be another surgery; we braced ourselves for changes in her medication, and we waited for the scans to come back. If you had

asked me then, I would never have thought that another surgery would have been a best case scenario.

It took about two weeks for the scans to come back. The cancer had blown past the radiation, there was no treatment, no surgery, no medication to look to

We would be lucky to be able to spend Thanksgiving with her.

We were not lucky.

We didn’t even make Halloween.

I can’t tell you how I spent the next few weeks.

I remember crying as I told my students what was going on.

I remember them crying with me (I have phenomenal students).

I know that my husband put school (he’s in a double baccalaureate program) on hold and moved in with his mother.

My kids moved in with my parents during the week because with my teaching schedule I couldn’t get them to school in the morning.

My husband’s sister came down and helped care for their mom. She was amazing and powered through a struggle and a loss I can’t possibly imagine.

I was numb to it all. I poured everything I had into supporting my family and teaching my students. The world at large ceased to exist for me.

It felt longer than it was, it felt like months. Looking at a calendar now it was only a two weeks from that diagnosis to when Pam died on the 21st of October.

But that time passed in this fog of emotions and exhaustion and I have aged because of it.

Pam’s Memorial was held the Thursday following her death. 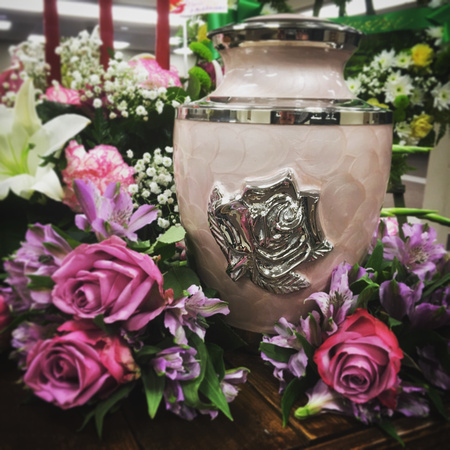 The job is, what it is; and everyone understood that. Pam was the sort of person who would have been livid if I hadn’t kept up my end as a teacher for that week.

She was already pissed off that my husband had put school on hold to take care of her and live with her in her final weeks.

A part of me is proud that I got through that week. I think she would have been proud.

A part of me is ashamed that I was not there for my family more.

Through this whole experience, I forgot that the film was above my computer.

I forgot I shot film.

Hell I forgot a lot of things.

I forgot STAR WARS was coming out.

All my energy was going towards my family.

Thankfully my district gives us a week at Thanksgiving. I spent most of that week in the kitchen or on the couch, trying to recenter myself and get to a point

where I could move forward.

I spent time with my side of the family, dearly loved friends, made two rounds of Thanksgiving dinner, and played my favorite video game.

December came and with it life began to return to something familiar. It was like waking up, I realized how much I had set aside in late September and all

of October. Somethings I had to address immediately like teaching research and exams I needed to write and the half and half going bad in my refrigerator

Other things, like art and film and photography, would have to wait until the winter break.

Which brings us to where we are now.

The quiet cold of winter break.

The Christmas tree silently twinkling in the living room.

The urn centered on the piano.

The chemicals that sit still in their shipping container, under the bathroom sink.

The film that waits on the shelf above my computer.

The aimless days between Christmas and Spring semester.

And the hope that I can make something out of all of that quiet.