When I first talked to people about this crazy 70mm journey, the question I usually got was: “so what are you going to shoot?”

And while my knee jerk response is “I will shoot literally anything”, I decided I wanted to focus on Cosplay. The colors are bright and the people are fun, and I love shooting it, all of it. I knew then that if I’m going to shoot cosplay I need to shoot at San Diego Comic Con. Some of the best cosplay in the world is out at SDCC; and I want to get it on my highly questionable film stock.

However, I don’t want to fail spectacularly when I’m there, either. The solution of course was to take some 70mm to another convention and give it a test run. That convention being Wondercon in Anaheim.

This is the day by day account of the convention, I'll need to reflect on it when gearing up for SDCC. 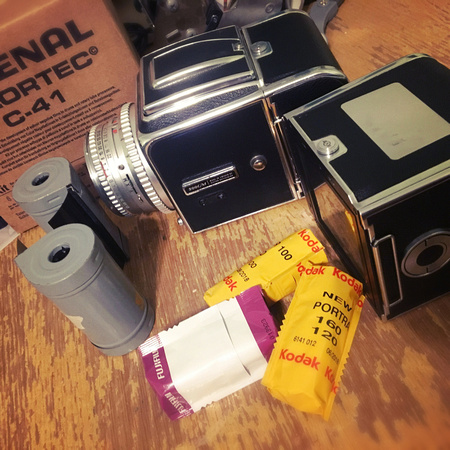 Getting people to stand still is a CHALLENGE I have to remind them that there is no autofocus and that this is going to take a little time. I got better at explaining this as the day progressed. At this point I just hope the photos come out, I would hate to go through all of this and then have nothing to show for it.

As something of a safety net I brought down some commercial 120 film, which I have been shooting intermittently, in sort of a “if everything fails at least I have this” kind of move.

I hope the 70mm film is loaded properly.

I hope I nail the development.

There are so many variables.

It feels good shooting film like this though, it feels right.

Saturday at con is always packed, always a big day, today is no different.

I’ll be shooting digital for parts of today, I have a couple of panels that I need shots of for work and as favors to the panelists. Other than that I’m film all day, again.

I have some friends coming into town in some pretty intricate cosplays, a couple of armor builds that are just over the top; I’m hoping I can get a shot of them.

Looking at what I have set aside to shoot today, I don’t think it’s enough. The film from yesterday went by really fast, I wish I had loaded another 70mm cartridge at least. I also think my first roll may have also been a bit short, we’ll see when I develop, I made a note on the canister.

If I run out of film I technically I have digital to fall back on, but honestly, I don’t want to. Yesterday was so freeing, I felt so much more creative and open to shooting than I have in years. I don’t want to lose that picking up the digital camera.

Day Three:
Yesterday afternoon was really interesting: I must have looked a little strange walking around with a digital camera and not shooting with it. I needed it to shoot a panel at 1pm, but then didn’t have time to put it back in the hotel room because I was meeting people right after the panel; so when I would ask someone to shoot they would see the digital and say yes and then be totally blown away by the film camera.

It was different. That’s for sure.

I also need to adjust how many rolls I bring. I had planned on one 70mm per day, but that ended up not being enough. According to my camera there are 70ish exposures on a 15 foot roll. Which isn’t a lot for digital, but it’s impressive for film.

However because of the quantity of quality cosplay on the Saturday of any convention I should have allocated another cartridge. This is going to be even more of an issue for SDCC, I am anticipating a cartridge each for Wednesday, Thursday, and Sunday. Friday and Saturday will each get two. At worst I’ll have extra. I also plan to bring some commercial 120 like I did this weekend, just in case.

Overall Wondercon was a great experience, the project was well received and everyone I shot with was really excited to be a part of it. For now I’ll take my commercial film to get developed, as I wait on the last bits of equipment to develop the 70mm. These are the last few hurdles before being fully prepared to shoot 70mm at SDCC in a few months.