So, it’s March now. And I’ve spent the last months, prior to even starting this blog, collecting the equipment to shoot and develop the truly silly amount of 70mm film that I have lying around.

If you’ll remember there were two major pieces of equipment that I needed to shoot the stash of 70mm film: the film back for the camera and the bulk film loader.

Some time in late November I found a film back online (thank you eBay) with six 70mm film cartridges.

It was quite a score and I was very happy with it.

I’ve got to say though, this thing is a beast. 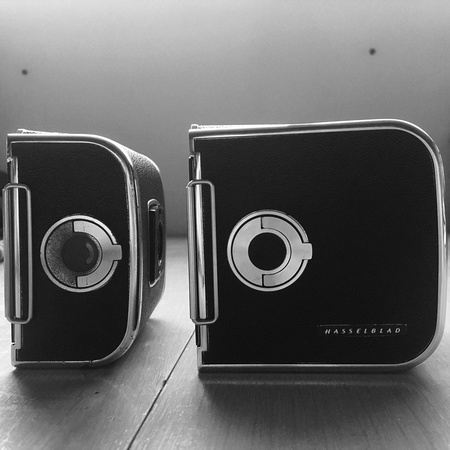 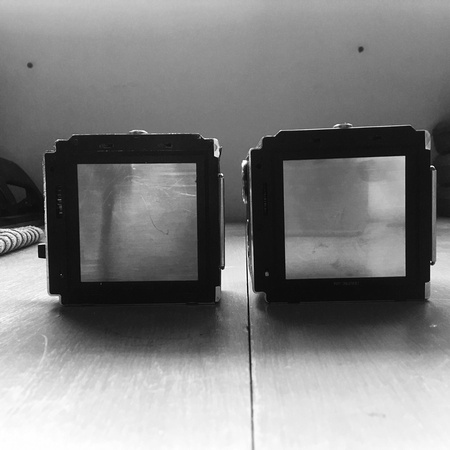 While the back is easily twice the depth of the 120 backs, the opening is the same size. I don’t know why I thought the frame size on the back would be larger, it’s still going to be the same as the back I’ve been using because the opening size is determined by the camera and not the back. (and I feel really dumb for having thought otherwise) 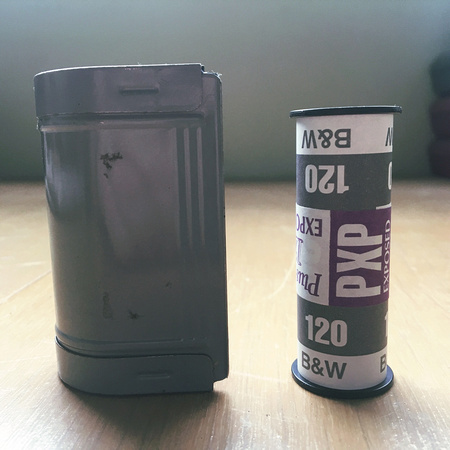 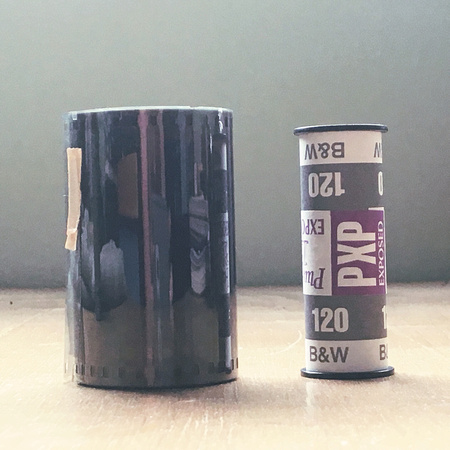 Just the height of this film blows my mind.

The film holders though, they’re far larger than I thought they would be; an inch in diameter and just over 70mm long, they hold about 15 feet of film at a time.

So then the issue became getting the film into the film cartridges.

For that I really do have to get a bulk film loader of some kind.

Up until this point I’d been considering hand rolling the film, however looking at the sheer amount of film I’d have to roll onto a single reel I realized that a bulk film loader of some kind was likely my best bet.

This search did not have an auspiciouis start; I could find none for sale. Not online. Not at one of the many camera and antique shops. No not even at the reseller/consignment camera sites.

I moved off the internet, calling camera stores and suppliers across the US. None of them had anything. A couple didn’t believe me that 70mm film rollers even existed. I left my name and phone number in the hopes that they might come across something, however slim. that chance; and I turned to my friends.

They were full of suggestions.

Some thought I should just roll them by hand; which is still a possibility but I don’t want to. Also figuring out how to measure exactly the right amount of film so I don’t waste very much isn’t that thrilling.

Other friends suggested 3D printing the film loader. And I mean, 3D printing the loader is an option, but the mapping and coding is out of my ability and I’m not thrilled about having to learn an entire system just to build something to load film.

I figure if I ever get really desperate I’ll turn to that; maybe. I want to totally exhaust every other option first though.

With eBay still turning up a fat zero, I combed through the internet to see how other people in my situation were loading their film. I found a guy who had built a roller out of a couple wooden boards, some bolts and washers, and a screwdriver.

His setup was looking really good and I started working on reverse engineering it to build my own.

At this point it was mere days until Christmas.

Still, I roped Keith into a couple long conversations about the best ways to build something that would let me roll the film I had a general idea about what I was going to need, while making cookies.

Multitasking is a thing.

On my next day off I made a list of what I would need from the hardware store and committed myself to a jerry rigged film loader. On a whim and an empty stomach I stopped at Chipotle to grab lunch, while I ate I ran the laziest, loosest search through eBay.

I got a lot of results for enormous hooks, which apparently load 70 tons of stuff, not what I expected exactly, but I figured if I got any results they’d be heavy equipment of some kind. Still, I kept scrolling. And there, at the bottom of the search screen was an Alden 70mm Bulk Film Loader.

I was convinced for a solid minute that my eyes were playing tricks on me.

Exactly what I was looking for, when I needed it, and there was a buy it now option. . . and it was priced at $60.

I had to be dreaming.

I packed up my food and went home to double check the search on a real computer and if it was real, buy it immediately. I was so panicked while driving. I was convinced I was going to get home, it would be gone, and I’d have to go back to the hardware store.

When I got to the computer at home I ran the search again and it was still there, still available, and the same price. I have never hit buy so fast in all of my life.

The going rate for an Alden 70 in 2003 was about $100, without shipping. So when I discovered that I would be paying another $50 some odd for shipping from Austria I couldn’t manage to feel bad about that; after all it worked out to be more or less the same price as 13 years ago.

Yes you read that right, Austria, that’s why I’m telling you this story months after it happened, I had to wait for shipping; through the holiday season. Ugh.

Anyway, a few weeks later, while fervently tracking the package my Alden was in, I ran another search through eBay just to see if any others had popped up, and low and behold they had. There had been one other sale, tagged to come up with a -70mm Bulk Film Loader- search, the sale price without shipping on that was over $200.

That’s just, it’s not, like I still can’t wrap my brain around it; how did I manage such a score.

I mean look at this thing; 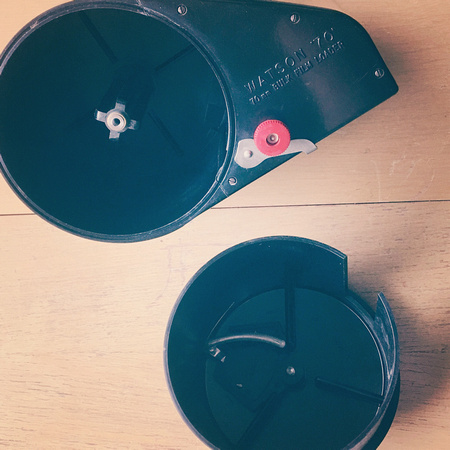 It’s been months, I still can’t quite believe it.

The loader came in, I already have the back, all I need now is chemistry and someone to shoot.

The chemistry is up next, I just have to calculate how much I need. This is all coming with me to Wondercon at the end of this month.
If you’ll be there, and you want to be a part of this crazy freaking project, drop me a line and let me know.