As I mentioned in a recent post, I’ll be jumping in head first and shooting the first rounds of 70mm at Wondercon this weekend . . . and as I was planning and plotting and scheming my shoots I realized: I should probably figure out how I’m going to develop this stuff.

I’ve pointed out before, I’ll be developing the film myself, I have all the equipment for it but, here’s the thing, I’ve never developed my own color film.

Black and White yes, Color no.

This is going to be interesting.

I looked up the chemistry for color development and decided to buy Tetenal, for no other reason than I recognized the name, I actually have no idea how it’s going to work out.

Tetenal is sold in 1L and 2.5L kits, and I had planned to buy the 2.5L kit, but my purchase options ended up being more limited than I anticipated.

See, Tetenal has an ORM-D code, because it’s potentially volatile or something. I don’t care. What I care about is that this means Tetenal needs to be shipped ground. Not a problem, EXCEPT when vendors decide they’d rather not deal with ground shipping and just . . . make it unavailable. (Looking at you B&H) It’s okay, I bought from Freestyle instead, and even though it meant paying more, they got it to me the same day. Which was magical.
Not so magical is that I had to buy the 1L kit because the 2.5L is sold out until April. 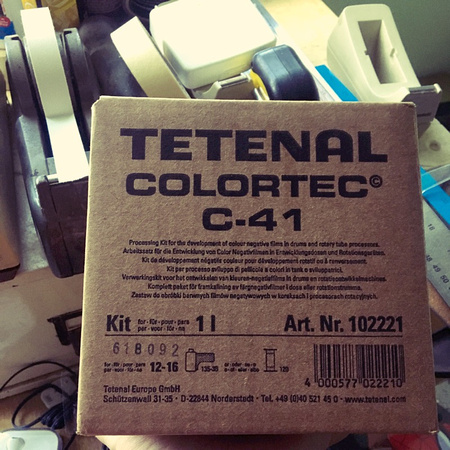 Back to the issue at hand, 1L Tetenal is spec’d at being able to process 12, 36 exposure 35mm rolls. BUT my film is 70mm wide and 15 feet long, per roll, and then I got to thinking; how much freaking chemistry is this project going to take?

It’s okay, I have science and math, I can figure this out . . . by creating the most convoluted word problem ever.

First Problem: How much 70mm film can I process in theory with a single kit of chemistry?

I’m assuming the thickness of the film itself doesn’t matter. I hope it doesn’t. We’ll see.

Not accounting for the length of the rolls.

Simple division tells me that this all amounts to two cartridges of 70mm.

That’s less than what I planned on going through this at Wondercon . . . I guess my chemistry won’t get old, it won’t be around long enough.

And then a thought occurred to me:

I can shoot 15 feet at a time, but how much can I process at a time?

According to a site that sells the Paterson tanks that I use, the plastic reels hold a single 26 exposure roll of 35mm.

Well this is going to suck.

Cutting the roll. Sacrificing two frames, and be able to shoot what is effectively 3 rolls of film at a time.

I hate the idea of cutting two frames in half . . . but not having to change the rolls basically all day, damn, isn’t that part of why I’m doing this?

I’ll give myself tonight to think about it.