When I initially began work on this project I knew I was going to have to hand develop all of the 70mm film myself. Why?

And I don’t want to send out the canisters ere they get damaged, stolen, or worse, opened by someone who doesn't know what they're doing. 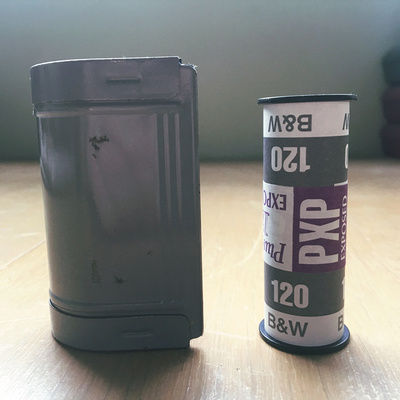 Yes that's the 70mm canister, they run upwards of $10 on eBay like hell I'm sending those out.

Which meant testing my developing tank and at home developing set up on black and white before moving to color.

At the time, Stan Lee’s Los Angeles Comic Con (formerly Comikazi) was coming up and I decided to take some film and the Hasselblad down for a test run. (The photos from the trip and subsequent development are the subject of an upcoming post)

I did not have chemistry.

What I did have was a bunch of old photo stuff I had picked up for free, or insanely cheap, as people purged their darkrooms and went to digital. I dragged out all the tattered cardboard boxes that had been stored and moved and stored again to see what I had and what I still needed.

I discovered I had:

-One 600mL graduated beaker, which I would need that to measure and mix the chemistry.

-A small plastic funnel, to pour the chemistry back into the storage bottles.

-A film thermometer, to measure the temperature of the chemistry to determine development times.

All I need was two more graduated beakers for measuring and holding the stop bath and the fixer, and of course the chemistry itself.

The solution to the graduated beakers was surprisingly simple, and available in my pantry. See, I only needed the precise, $15 graduated beaker for the developer; stop bath and fixer are both eh in terms of exact measurement. For those all I needed was roughly 600mL at a time, and did you know that older jelly jars, the quart size, have mL measurements on the side? They do! And I had some of those in my pantry. 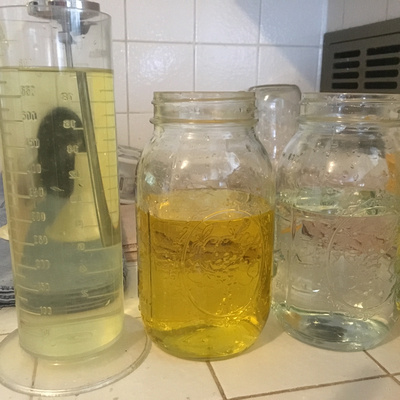 Perfect non porous containers to measure and hold the stop bath and fixer during development.

That just left the chemistry itself.

To develop black and white film there are only about 4 chemicals you really need.

I also use Hypo Clearing Agent in my final wash, but that’s technically 'optional'.

Of those; the stop, fix, and hypo are all pretty much the same regardless of which brand you purchase.

Water will vary in composition from source to source, but the hypo clear helps nullify that and stop any hard water deposits from showing up. Seriously, I know it's 'optional' but I really don't recommend home development without hypo.

Coming to the developer, that’s another story.

When I was in college I only ever used D76; because that’s what the college lab supplied, and why would I buy chem when I could just use the chem there for free?

But now, shopping for developer for this new project, I’ve found myself with the knowledge gap that I didn’t know existed, there are way more developers than I could have ever dreamed.

What the hell was I going to use to develop my film? 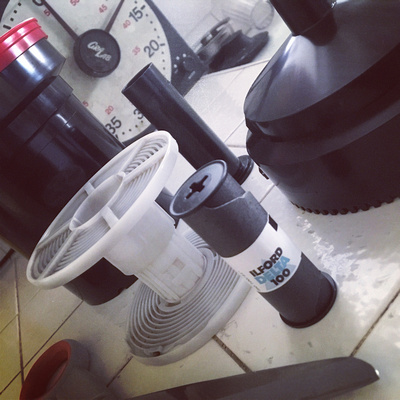 I’d like to tell you that I started where any good academic starts, with books. That I spent hours pouring over old, quasi-accurate, books from the 1970s that I dug out of a dusty library corner. That I blew dust off old volumes and Gandalf’d my way to the knowledge I so desperately sought. Embracing the antiquity of the practice that is inextricably tied to the practice of film photography.

Nor did I dive headfirst into the internet, seeking out the new and old and rediscovered and inventive ways to develop film. This renaissance of film photography that is happening, I wish I could tell you that it helped me bridge this gap in understanding the photographic chemistry. I’m sure all of that information would have been invaluable to someone who actually did their research.

All of that, however, is not the way I do photography. I am less Ansel Adams, meticulous and thoughtful, than I am Han Solo;

“I never ask questions until after I’ve done it.”

And true to form, I just went to my local photography supply store (yes I still have one, it’s Horn Photo and I love them) and picked up a bottle of HC110 concentrated developer along with the rest of them chemistry. Why HC110? Because it was liquid and I hate mixing powder, as I discovered in college. That is literally how much thought went into this choice.

Which is to say: not much thought at all.

For the short drive home I was pretty confident in my ability to use this developer, and then I discovered ALL the ways it could be diluted, there are so many. There’s no one dilution recommended by Kodak, as I had thought. Each dilution required different development times and had varying resulting densities. Finally, deciding some research might be necessary, I turned to the internet.

There are some really dedicated (read: obsessed) people on the internet who go to great lengths to develop their film exactly the same every time, as I’m sure most people do. Or the ones who make sure their developer doesn’t touch the air any more than it has to, probably not a bad idea. And my favorite, the guy that doesn’t believe in agitation . . . I don’t know what to do with that, that’s just bonkers.
Look, I wasn’t kidding when I said I ascribe to the Han Solo school of photography, and life honestly: “Give it a go, see what happens, talk your way out of it if (when) you screw up.”

Which I unsurprisingly what I chose to do: jump in and start developing, see what I get, tweak it when necessary, and talk my way out of it when I screw up.

I know what you’re thinking “Deb you can’t talk your way out of botched development,” to that I say, Watch Me.