Once upon a time my husband, Keith, did a favor for a friend.

That friend was going through a nasty divorce and didn’t have money, so he paid Keith in gear.

Some of it Keith kept, but some of it was more my speed than his; specifically a Hasselblad 500 c/m, with two backs and a lens. The friend threw in some expired film he didn’t plan on shooting, some black and white film and 12 boxes of bulk Portra film, 100 feet each. At the time I didn’t look too closely at the boxes, and assumed they were 120. What else could they be? I didn’t know of any other film that width.

But the time that Keith got all of this was rather, tumultuous; we were getting ready to move, I was going to school for my BA, and the place Keith was working at the time was in a similar state of upheaval. Assessing our new toys was just not in the immediate future.

We carefully packed the film and the camera, moved everything to the new house, and put it all somewhere safe.

(I’m sure you’ve figured out what happened next.

Answer: A whole lot of nothing.)

And then, in an attempt to declutter my life I decided to deep clean and organize all of the camera equipment and various photography paraphernalia that I've accumulated over the years. Which is when I rediscovered the boxes upon boxes of film.

And newly discovered that the color film was not 120 as I had expected but 1200 feet of expired Portra 70mm. An altogether different beast.

I was going through a lot emotionally when I discovered it; and there was no way I wasn’t going to shoot through all of that; but taking on this project meant cataloging everything and figuring out what I needed to make this happen.

I started with the most obvious, what did I actually have?

A Hasselblad - in need of a new ground glass, and perhaps a good cleaning

And 2-120 backs, seem to be in good condition, should be tested for lightfastness before serious shooting beings. 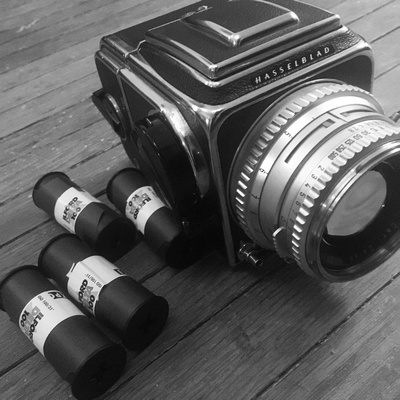 The 120 backs were where I hit my first obvious snag, neither of those backs would fit 70mm film.

I’d need a back specifically for that film size. 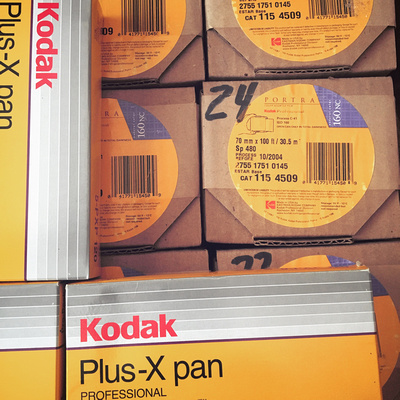 That’s right, I had black and white too.

Which is awesome because one - I’m familiar with it, and two - the film was all stored together. So if the older, less protected Plus-X was okay, then the Portra would probably be okay as well!

Yes, there was much happy dancing.

Development proved to be the easiest part of this mess: I did a lot of my own development before going to digital, and C-41 and Black and White use the same equipment for development, which I still had. Chemistry wouldn't be too hard to get either. Sure there would be some transport issues because of the ORM-D codes. But that was minimal when faced with how I would get the 70mm onto the camera.

See, aside from the new ground glass, I was going to need a Hasselblad specific 70mm back and a bulk film loader to get the 70mm off the reel and into the camera.

So I ran a little google search for both of those things, I found a bunch of 70mm backs on eBay, which was good. The bulk film loader not so much.

Equipment sale/trade sites are awash in 35mm bulk loaders. But trying to find one for 70mm that’s for sale is damn near impossible.

The most recent records I could find for the damned thing had one up for sale in like 2003, and nothing for sale since then.

On the entire internet.

This left me with two options: modding or building.

Modding my own out of two 35mm rollers is an option, but it has been pointed out that Bakelite (the material these are made out of, it’s a really early plastic) is toxic and not at all good for someone (me) to breathe in . . .

Building my own could mean 3D printing it, OR using some gloves and a screwdriver and loading it by hand.

I’m going to sleep on it.