No, not the “when was this made” dating. The “I’ve bought you a present, put it on and let’s see what happens,” kind of dating.
It’s way more fun. 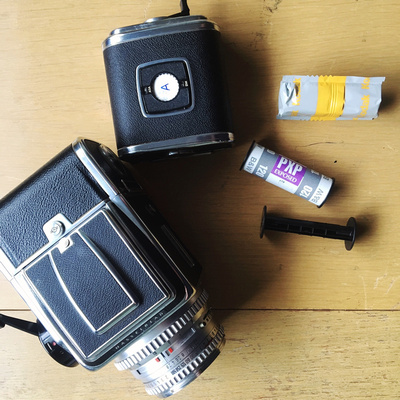 Look, you have to get to know your camera if you want it to do anything for you, film cameras especially. They’re old, set in their ways, they have flaws and quirks that make them unique and special, and sometimes you can spend the whole day together and it’s magical.

When we (gear-junkie-photo-nerds) talk about gear, we start with the camera itself. Truth be told the body is little more than a light tight place to put the film with a hole in one side to take the picture. You can make a camera with a paint can, but more on that another time. Anyway if you have purchased or inherited a new-to-you-but-freaking-old camera it is important to make sure that it is light tight, or that if there are leaks, the leaks are minimal.

Sometimes light leakage isn’t a deal breaker because of the interesting and unique effect it gives your negative and final print. In my case I have irregular light leaks, and because of the way film reacts with different light temperatures I can get all sorts of fun color casts, as well as a nifty L shaped flare in the lower left corner of the image. I like the unknown variable of my camera, you might not.

By taking the camera on a date, of course.

“Here honey, put this back on and let’s make some magic.”

Seriously though, the best thing to do when you get new gear is to run a roll of film through it; the $7-10 is a worthwhile investment in your gear. Maybe it’s just me but, I’ve always loved those first rolls from a new camera, they’re an unknown, like a first kiss.

Anyway, with any new equipment I test it out using unexpired film and get it developed at a reputable lab. That limits the possibilities for any artifacts on your film being there because of errors in development or chemistry. Personally I use my local lab, Horn Photo, for unexpired rolls of commercially purchased film. There are places to get your stuff developed via mail order, but I like being able to go into the store and BS with the staff.

It’s important to remember that older camera equipment will be janky somehow. It’s not going to be pristine and mint, I don’t care where you got it. It’s going to have leaks and wonk and that’s okay.

At least I’m okay with it, as long as I know about it.

So when I pulled the Hasselblad out of storage I picked up some color film, one roll for each of my two backs, and shot my way through them. I labeled both the backs and the corresponding film rolls so that I could see if there were issues specific to the back. I would also be able to tell if there were issues specific to the body, because they would show up in both rolls.

Remember how I said that Horn has great service? I asked them to mark the film so that I would know if it was roll A or B (and thus which back it came out of), and they did so in large sharpie so there was no way I would mistake which roll was which.

And now I know that back A jumps when I advance the film, but only sometimes, and when it does that little jump I’ll have an L shaped leak in the corner of the photo.

I need to know that kind of detail for any equipment I use:

When I get a new lens I’ll do the same thing.

The point is that by spending some time getting to know your camera, ‘dating it’ if you will, you’ll know what your gear is going to get wrong, where the limits are of that specific piece of equipment, and what special little things you can get your camera to do that no one else knows about.